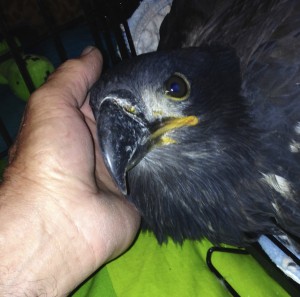 On Thursday, July 3rd, Mike Aguirre with the help of Kevin Calder and BZ Miller, created a makeshift platform in a suitable tree about 100 yards away from the nesting tree from which the young eagle fell.
The nesting tree was too high and impossible to get to with a lift. After placing the eagle on the platform about 30 feet off the ground, the three men quickly withdrew from the area. The young eagle was in clear view of the parents who were watching them the entire time. A neighbor, who had a view of the tree, said later that the young eagle sat on the platform all day Thursday, Friday and Saturday, but there was no sighting of the parents going to the young bird. 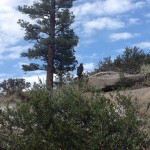 On Sunday morning, Mike went back to the location, only to find that the bird was no longer on the platform. He proceeded to walk the area wondering if a predator had got to the bird. As he walked further away from the tree and up a rocky knoll, the parents soon appeared flying and soaring above him and vocalizing what was probably warning sounds. A few minutes later, Mike spotted the younger eagle perched on a nearby rock about 20 feet from him. He slowly backed up and left the area. 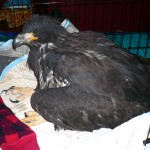 The initial goal, which was set in place by Cindy Kamler of the Eastern Sierra Wildlife Care, was to re-establish contact with the parents, which is what happened.
“It was  amazing,” Aguirre said. “I’m still pinching myself that I got to be a part of the that rescue. And being around the 4th of July made it especially patriotic. Now it’s in nature’s hands.”
Many thanks to the Eastern Sierra Wildlife Care and the work they do. To make a donation, visit www.eswildlifecare.org. 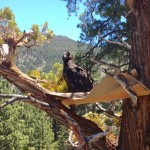 ####
More personal thoughts from Mike Aguirre:
It’s important to note, that when we had the cage up in the lift and positioned half on the rail of the bucket we were in and half on the platform in the tree, he began to back out of the cage and onto the platform, but one of his talons got caught in the wire of the cage.
He got all distressed trying to pull his foot free. He eventually jumped back in the cage freeing his foot. His feathers were all fluffed up from the obvious stress and he was scared. I opened a side door of the cage and stuck my hand in and slowly put it on his head. 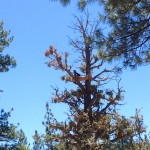 Again, he let me pet him as I talked to him and told him it was OK. His feathers relaxed and he laid down on his breast. After a few minutes of being with him like that, I told him it was time for him to go home. I reached in and pushed him up on his feet. I then nudged him backwards toward the platform till he was on it and out of the cage. I said goodbye and we backed out as quickly as possible.
Back to Sunday, as I moved up the hill further, the parents took flight from the trees and were really starting to cry out. They were soaring closer to me, perhaps about 40 feet above me, circling. I had a hunch I was going in the right direction based on their activity. 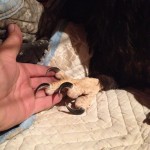 And then … I looked up the hill and there he was, perched on a rock. I was about 20 feet from him. He was staring right at me, and I at him. I believe he knew it was me. It was an emotional moment realizing that Mom and Dad were taking care of him and that our plan worked. I then backed away and left.
I was thinking how cool it would be, to walk out my house some day, after he had his white feathered head, and there he’d be perched on my roof with a fish in his claw. And then tossing me the fish and saying, “Hey kid, thanks a lot.” 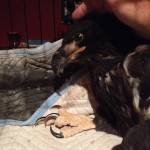 On Sunday, I went out there to check on him. As I mentioned, when I got there he was gone from the tree. A neighbor said he heard branches snapping and a lot of noise coming from the tree area at about 9:30 the night before. I feared a predator had got to him. So I went looking for feathers, or worse a carcass.
As I moved up a rocky knoll, I notice vocalizations coming from the trees around me. As I looked up into the trees I saw the parents watching my every move.
Some of the pictures show where he landed after his 100-foot fall; also when I got him to my house and shortly after I had given him some fluids. I was pretty nervous as I didn’t know what to expect, but what ended up happening was nothing less than an amazing moment. 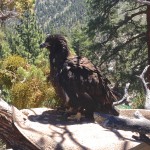 I slowly touched his head and then started petting him. He just sat there. He didn’t flinch or spook. He just sat there and let me pet him. He would blink his eyes with each stroke. I just couldn’t believe I was petting a bald eagle in my house. He never once tried to bite me or showed any aggression. I just talked to him and told him everything was going to be OK.
At this point we didn’t know if he was hurt or not. And as it turned out he wasn’t (I’m using “he” but it could be a “she”)….
Also: a picture of the nesting tree in the distance from where he fell. If you look about 3 or 4 branches down from the top on the right, you can see his sibling standing on a branch close to the body of the tree. Located right below him is the nest, however, the nest is really hard to see as it is camouflaged. 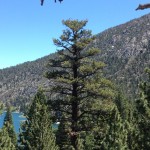 We are up on a hill pretty far away. The picture was cropped, which gives the impression that the tree isn’t that tall. This picture was taken from the tree where we built the platform and placed the baby on. As you can see it is direct view of the parents and the nest. The other pics are of the little guy once we got him out of the cage and onto the platform.

Kudos to Mike, Kevin and Brent. Nature doesn’t always promise or provide kindness, but it never hurts those who do show it.

Georg, seriously? How about helping an endangered animal w/out the aid/opinion/determination of government? I see these 3 birds every single day and I am amazed every day. These guys did a good thing. Accept it for what it is.

While you may have broken several federal laws, I think most of us would say good for you!!! It is an elevated human specie that wants to help majestic animals such as a bald eagle, which by the way is making a comeback in Mono County and the rest of… Read more »

This is a very nice story, but I can’t help but wonder why nature was not allowed to take its course. Why did A Fish and Wildlife Warden allow the Human intervention? The Eagle fell out of the tree and surely would have been eaten by a predator without Human… Read more »

When people have a skiing accident, do we just leave them on the slope to find their own way home because they are “weaker”?

Maybe Human Nature took it’s course appropriately in this course of nature, Georg. The best of who we are as human beings meant saving this eagle . Great effort by the crew , thanks for holding up the goodness of our humanity and more power to you all when your… Read more »