The end of an era. That’s how fans of the Alpers Owens River Ranch feel about the news that Tim and Pam Alpers are selling the ranch, located at the spring-fed headwaters of the upper Owens River in Long Valley. 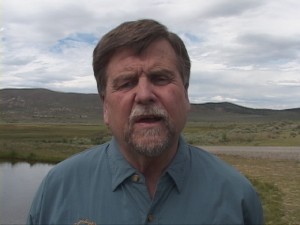 The San Diego Union published the story Sunday. According to the Union, the buyer of the century old Owens River Ranch land is Alpers’ neighbor, the Gottwald family which already owns the historic Arcularius Ranch, an adjoining property.

Tim Alpers’ is quoted in the article as saying that he is going through a grieving period like a lot of others who love the ranch. Alpers says he’s selling due to a combination of things – “too many government regulations and I’m getting toward retirement age.” The article says Tim is 60. Alpers told us that “the cumulative impact of regulatory compliance between the Department of Fish and Game and the Lahontan Water Quality Control Board, coupled with the cost we would have to reguild the resort cabins made it impossible to go on.”

In the past couple of years, Alpers has had to wrangle with Fish and Game over New Zealand mudsnails in his waters. There were other conflicts over fish. Alpers was never shy about standing up for the trout industry here. Fish and Game officials were often the target.

Alpers said that the ranch will be kept as an open space sanctuary and will not be developed. The article quotes him as saying that the ranch “will remain a fly-fishing retreat and a sanctuary for migratory birds, wildlife and spawning trout coming up stream from Crowley Lake.”

Alpers said his family has been “temporary stewards of this land for over a century.” The Union article does confirm that Tim Alpers will move on with a new trout hatchery at Conway Ranch in the Mono Lake Basin. We reported locally that Alpers and Crowley Fish Camp’s John Frederickson had partnered on the Conway Ranch project. The new hatchery is expected to turn out about 45,000 pounds of the famous Alpers trout. The Union article says that’s down from the former 70,000 pounds a year Alpers produced, but he is quoted as saying there is more to come.

Like a new strain of trout called a Hofer rainbow, imported from the Bavarian Alps in Germany and thought to be resistant to whirling disease.

For those whose families had made the Owens River Ranch a tradition through the generations, the news came as a blow. As one man said, Alpers’ Ranch was a piece of heaven on earth.