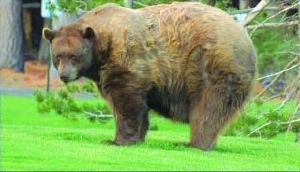 9/17: Main Street – A bear pushed open an unlocked door and got stuck in an apartment after the door locked behind him.  The bear caused damage to furniture and the window while trying to get out. The bear was let out through the front door by Officers and then hazed with less lethal rounds. Please lock your doors and windows.

9/18: Chateau Road – A bear got stuck in a car after opening an unlocked door. Lots of damage was caused to the vehicle as the bear tried to get out until the bear was freed by Officers.  Make sure your scented items are removed from your car (this includes toiletries). Our bears know how to open unlocked car doors!

9/19: Manzanita Road – Two bears were running through wide open garages.
Chapparal Road – Several calls came in throughout the day concerning bears stuck in tree. It turns out that neighborhood kids had spent the day taunting the bears and keeping them treed. The kids were educated, and the bears were escorted off the street by Officers.

9/20: Lupin Street – A bear broke into a garage in pursuit of frozen meat.  The garage was accessed through the neighbor’s open garage.  The neighbor was educated by Officers about living in bear country.

9/23: Main Street – Two bears were in a hotel parking lot with one stuck in a car. The bear in the car was freed by Officers and then all three were dispersed with pepper balls. Make sure all scented items are removed from your car (this includes toiletries).  Again, the car was unlocked.
Old Mammoth Road – A mother bear with a wounded leg and two cubs were on a property on Sierra Nevada Road.

09/24: Ski Trails Road – A bear was found in a home when the owner returned. The owner was unsure how the bear got into the house, but he left through an open unlocked window with a pack of bacon. The bear was gone when Officers arrived.

9/25: Cliff Circle – A mother bear and her cub were in an unlocked trash can, they were scared off with an air horn.
Highway 203 – A report came in of an injured bear in culvert.  After the bear was observed for approximately 20 minutes, Officers watched the bear walk deeper into the culvert with no apparent injuries.  A quick look around the area revealed several piles of bear scat and vomit containing plastic bags, paper, and other garbage.  The bear’s groaning noises was the result of a tummy ache.

9/27: Lupin and Meridian – A bear was hanging out between the condos eating from a cooking pot. It appears someone is feeding him. The area is now under observation.  Remember that it is illegal to feed wildlife.
This Month’s Theme: Shut and Lock Your Doors and Windows!

Don’t be cute, bring back Steve.

I got a good laugh out of these…I think it’s time to bring back Steve Searles .

Bring back Steve, the Bear Whisperer!