By News Staff on November 25, 2014 in Government Agencies/Utilities 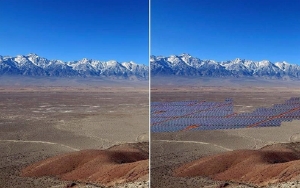 View of possible before and after SOVSR. Westward view from Inyo Mountains. Photo by Bill Helmer

Save the valley…from the Planning Department by Daniel Pritchett

An important problem with last spring’s draft REGPA was the conflicts it created with existing land management plans.  Existing plans require non-urban DWP land to be managed for sustainable uses such as agriculture and grazing, as well as providing habitat for threatened species.  They preclude industrial development.  The conflicts between last spring’s REGPA and existing management plans were noted repeatedly in public comments.  The new draft REGPA EIR creates the same conflicts as last spring’s draft by proposing a Solar Energy Development Area (SEDA) on DWP land at Laws.  It’s as though all those meetings and comment letters never happened.

Existing DWP land management plans are a hard won mitigation measure specified in the 1997 MOU to the Inyo-LA Long Term Water Agreement.  Inyo County is a party to this MOU yet ICPD seems to think compliance is optional.  We’re accustomed to DWP signing agreements and then breaking them but we shouldn’t tolerate this behavior from Inyo County.  If the county wants to industrialize open space at Laws, it should re-negotiate the MOU and obtain other mitigation before modifying the General Plan

In addition to opening inappropriate land for industrial development, the new REGPA EIR fails to close land (i.e. Owens Valley) the public overwhelmingly insisted should be closed.  Last spring’s proposed “Owens Valley REDA,” which inspired so much opposition, has been greatly enlarged in the new REGPA EIR and renamed the “Owens Valley study area.”  This opens the door for the next planning initiative (scheduled for 2015) to propose even more industrialization in Owens Valley than was proposed last spring.  County supervisors and ICPD are supposed to work for the public; in this case they are doing the opposite.

There are other problems with this new REGPA EIR which bias it toward industrial-scale solar even while ICPD claims to be trying to protect the county from inappropriate development.  I hope everyone reading this letter will tell ICPD the comment period must be extended at least through the end of January. Then, read the EIR (as much as you can tolerate) and submit a comment.  If we all make our voices heard we may still be able to save the valley… from the Planning Department.

We work to provide daily news to all of the Eastern Sierra, in the tradition of Eastern Sierra News Service and the Sierra Wave. We bring you daily happenings, local politics, crime, government dealings and fun stuff. Please contact us.
View all posts by News Staff →
Busy year for Mono County Search and Rescue
Mammoth Ice Rink will open
6 Comments
Newest
Oldest Most Voted
Inline Feedbacks
View all comments

If the projects are on BLM land then the county and it’s planning commission have no veto of any proposed projects. The BLM and CEC have final say. At best the county can create a plan that is mutually acceptable and hope BLM and CEC agree. But as far as… Read more »

DT You may be right about the use of federal land, although the Feds can be required to comply with local environmental laws on federal land. However, cities do not have anywhere near the power you assert. First, a city ordinance is effective in the citiy’s jurisdiction, which most definitely… Read more »

Major Tom, please read Article 11 of the California Constitution. Charter cities in California have extraordinary powers compared to General Law cities and their ordinances do indeed supersede any other conflicting state, county or other local laws within the boundaries of the charter city and any land a charter city… Read more »

Can you define: “industrial-scale solar facilities”?

Where exactly are these planned facilities located?

There is no glossary, no definitions in the Draft REGPA documents. There is a lot of terminology being thrown around with little collective understanding kinda like Winston Churchill’s famous quote “England and America ,two countries divided by a common language.” Great question KW There are three category’s of renewable energy… Read more »

Thanks for your studied reply.